Orlando Pirates assistant coach Rulani Mokwena made headlines for the 'planned' mind-games he employed in the lead-up to the first Soweto derby against Kaizer Chiefs. Yet, ahead of Saturday's Telkom Knockout semi-final, it seems his path in the game was inspired by a strong connection to both Bucs and Amakhosi, as well as Mamelodi Sundowns. Vodacom Soccer's David Minchella takes a look.

When Mokwena left Sundowns in 2017 to join Pirates, he gave the clearest indication just how seriously he approaches his profession, saying: "My soul has insatiable thirst for success. I've learnt, I've loved, I've served diligently and I've contributed with every piece of me."

Yet, he has been at the centre of a healthy debate in South African football for comments he made ahead of the 2-1 victory over Chiefs on 27 October, when he said: "Steve Komphela is in my opinion a big loss for Chiefs from a technical perspective."

He later told Vodacom Soccer that it was planned strategy to unnerve Chiefs in much the same way as Alex Ferguson used to use mind-games with the opposition for Manchester United.

Mokwena said: "Yeah, all of it was planned but, in a way, the media blew the Komphela statement out of context. Didn't mean any disrespect towards him (Giovanni Solinas) but rather to praise Steve. But it's all good."

Things escalated when former Downs star Bongani Zungu suggested in a Tweet that it was Mokwena that was responsible for Pirates and Sundowns' success. Having made his name with the Brazilians under Pitso Mosimane as an assistant, it lead to a feisty 0-0 draw against the Brazilians on 10 November during which time a fan confronted him in the technical area.

However, he later told Vodacom Soccer that he urged Zungu to apologise even producing a private message from the player that read: "Hi coach, I've just seen the videos of what happened today. I'm very sorry. It's all my fault people are fighting you. I'm the one who they should be fighting. Not you. I feel really bad."

In addition, Mokwena has been very animated on the sidelines ahead of head coach Milutin Sredojevic though he explained why to this publication, saying: "The chairman asked me to be more directive in Micho's presence because of the eventual handover."

While his colourful personality has helped bring more life and interest to South African football life especially among the big three teams, it perhaps then comes as no surprise he comes from football royalty.

The son of Julius 'KK' Sono - a star for Pirates for five years in the 1980s - he is also the nephew of SA great Jomo Sono. This in turn makes him the nephew of the late Eric 'Scara' Sono - the Bucs skipper in the 1950s who circumvented Apartheid laws to help bring in the likes of Bernard 'Dancing Shoes' Hartze and Mannie 'Al die Hoekies' Davids.

Speaking to IOL's Njabulo Ngidi in March, Mokwena said of his bloodlines: "I know I would have probably also made it with the help of my uncle and my family.

"But it was important for me to be able to say that I did, and I did it my way. This eagle flew and it flew when it jumped far from the nest and it tested its wings.

"When it found that there was strength in its wings, the eagle continued with its flight."

Nonetheless, a former Kaizer Chiefs midfielder and coach has also played a key role in his development when it was Steve Komphela who handed him a chance at Silver Stars (later Platinum Stars and now Cape Umoya United).

In 2005 Pirates approached him and current Bafana Bafana assistant Thabo Senong to join the club but he decided on Stars, saying: "It was this inquisitiveness that I had which said I don't follow the crowd. But I didn't know then, I only see it now that I am tracing my footsteps how many times I have gone against the grain to take a route that didn't have a mark with the aim of leaving a mark."

His clear talent coaching the side's U15s and U17s saw Komphela call him into the first team technical team and he made his debut as a head coach in August of 2009 when his mentor was suspended against Santos: "I can never forget it. We are talking about my PSL debut here. It still today gives me goose-bumps and shivers when I talk about it."

After a stint away to pursue his studies while also working as an analyst, he returned to the field to coach in 2012 with Downs' U15s. Once more his talent shone through and before long Mosimane brought him into the first team.

He says of 'Jingles': "He is fantastic on the training pitch. When you stand on the shoulders of such great coaches, it can only stimulate you so that you can see further than where they have been."

With a career so far that has seen him mentored by some of the most successful people from Pirates, Chiefs and Sundowns - he seems set for bigger and even brighter things at such a young age.

Ahead of this weekend's keenly-anticipated second derby of 2018/19, he concluded that he would continue to be an energetic presence on the sidelines: "It's okay my brother. I do certain tasks like substitutions etcetera, but it's okay. All is well. I'm calm."

Saturday's TKO semi-final clash is set to take place on Saturday at the Moses Mabhida Stadium in Durban. Kickoff is from 15:00. 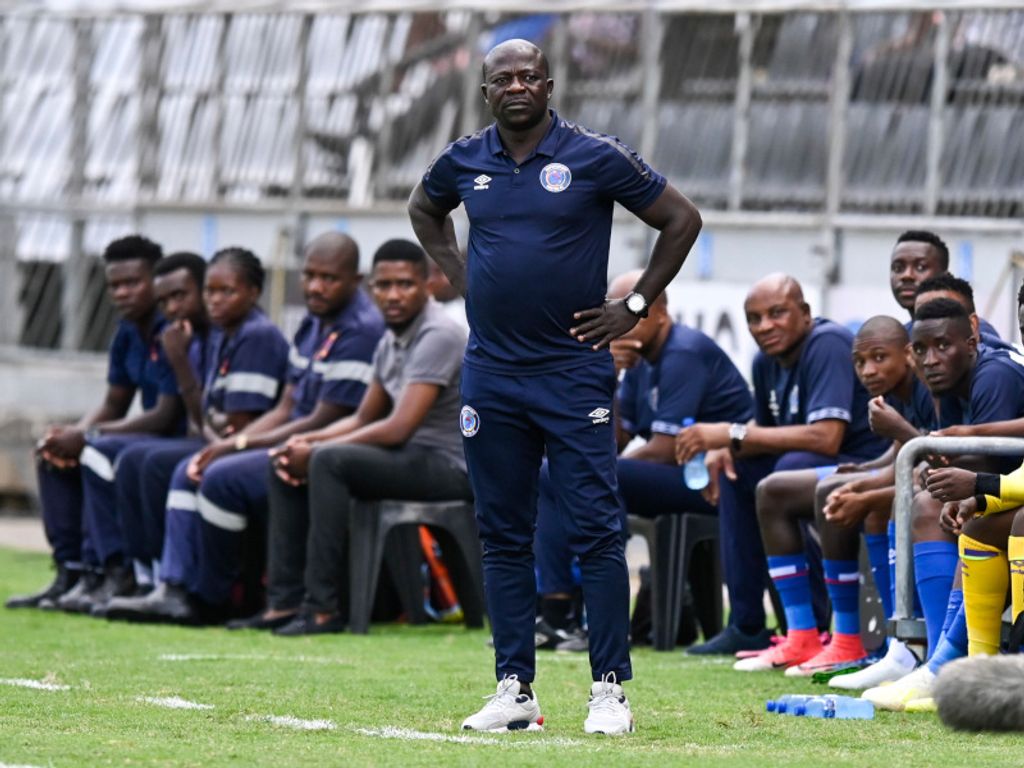 Alexander: My foundation is strong

Mosimane: Someone had to end Soweto's PSL dominance

Nascimento: Sundowns get better every year

Hunt: No offers on the table

Ncikazi: The lockdown has united us

Makobela not retained by Chippa